Upon my advice, another one of my clients recently switched their medical practice from Internet Explorer 6.0 to the Firefox 1.0 web browser. The switch has been highly beneficial, and I will summarize the results here.

The setting for this migration is a busy medical office where six staff members use a web-based practice management software to do their work. About five additional staff members will soon be migrating from their current DOS-based billing program and paper schedule to using the web-based software. The operating systems are a mix of Windows XP Home and Windows 98. The Windows 98 machines will soon be replaced, possibly with Mac Minis running OS X Panther.

The staff use the web browser continuously throughout the day, so reliability is critical. Even a small glitch causes them great consternation. Due to the high-availability requirement, any bugs in the practice management application (written by myself) are logged and quickly corrected. Therefore, problems with the client applications (in this case, Adobe Acrobat, Internet Explorer, or Firefox) rise to the surface and are readily apparent.

The web-based practice management software is built to the web standards. It does not require proprietary technologies that lock it into a specific web browser. In this case, care was taken to avoid using ActiveX controls and Microsoft-specific Javascript and HTML. The software is just as functional, but not tied into one company's product. There are many practice management applications that lock an office into one vendor, thereby increasing costs in the long run. Use of a standards-based application allowed the office to reap the advantages of switching to another browser.

Installing Firefox on all the computers was a cinch. Since the installer located at GetFireFox.com is under 5 MB, downloading it over the office DSL line took under a minute. The installer worked perfectly every time. The program was installed to the default directory and IE settings were imported. There are no spyware, adware, or extra desktop shortcuts that must be uninstalled later, saving even more time.

Next, we installed Adobe Acrobat Reader 7.0. Acrobat Reader runs embedded in a Firefox frame, just as it does in Internet Explorer. Once Acrobat Reader was installed, we customized Firefox. All that was needed was to set up links to the office web server so the staff could log in to their application. Firefox conveniently supports drag-n-drop creation of bookmarks. So, we simply typed the URL into the location bar, and then dragged the page icon to the bookmarks toolbar. Finally, we renamed the buttons as needed by right-clicking on them and accessing properties. All of this setup could have been scripted if there were more PCs.

The office web server traffic is SSL encrypted with a self-signed certificate attached to its private domain (server.domain.local). For all the PCs, we added that domain to the hosts file. The first advantage of Firefox over IE is that Firefox does not require a cumbersome configuration process to trust the certificate. All we had to do is check the "always trust this certificate" option the first time the web site was accessed. Previously with IE, we had to find and read several Microsoft support documents in order to learn the dozen or so steps needed to add a trusted certificate. One great pain is already eliminated by switching to Firefox.

Once Firefox was installed, the staff were able to begin using it immediately. The difference in startup times between IE and Firefox is not significant, which is a major accomplishment for Firefox given that IE is integrated with Windows. In terms of the speed of rendering pages, the difference between the browsers is indistinguisable. Firefox has no problems rendering all the pages that IE can render. Some minor stylistic issues were discovered (such as width and centering of option boxes and buttons), but those style attributes were easy to correct. Also, via the Firefox "Javascript Console", we were able to find, diagnose, and fix remaining Javascript errors easily. In some cases, Firefox helped us to discover code that worked in IE even though it was not standards-compliant. Switching to Firefox led to improved code quality and understanding of the standards.

Most importantly though, the staff were relieved of a certain pernicious, documented bug in Internet Explorer. Our application generates several PDF reports dynamically via forms. It turns out that IE gives the following warning message in this circumstance: "This page contains both secure and non-secure items." According to Microsoft, this bug is due to a caching mechanism that is not fixable without breaking support for other ActiveX controls. Since the server-side workarounds for this bug were ugly, the staff constantly had to dismiss this dialog box each time they generated the PDF. Such bugs not only waste time, but they are a huge drain on staff morale.

The staff are also benefitting from Firefox's elegant "Find" feature. In some pages, they are presented with a long list of items, such as insurance companies, in which they have to find one to work on. Instead of cumbersome scrolling, they can simply press Ctrl+F and enter the first few characters of the desired item, and Firefox scrolls directly to and highlights that item. While IE also has a search feature, it opens in a new dialog instead of a border extension, requiring many more keystrokes and moustrokes to operate. The Firefox "Find" feature is so easy that it is a joy to use.

The office did not previously have Internet access. We enabled Internet access before we installed Firefox on all the PCs. Thus, for a time, some of the staff were using Internet Explorer to access the web. Sure enough, one of the PCs became infected with pop-up adware from the GAIN network. With IE, infection by adware, spyware, trojans, and viruses is an eventuality. By contrast, on the PCs where staff were instructed to use Firefox, no damage has yet been done to the PCs. While IE is a known liability, Firefox comes out-of-the-box configured to be safer.

During the several months that Firefox has been in use, the staff have had no problems with it that could not be solved by simple training. For example, some PDF documents open in another frame. When the user presses Ctrl+P to print them, sometimes the browser would print out the HTML frame instead of the PDF document. Once the user was instructed to either click in the PDF frame to activate it, or use the Acrobat print toolbar button, they were able to print the PDF successfully.

Before migrating to a different browser, an office needs to be sure that the web applications they use are browser-neutral. Purchasing agents and consultants need to be aware of standards compliance, as applications not written to web standards deny access to improved browsers. Those who adopted IE-specific software where it was not needed are now stuck with a product that is inferior in the best case, and destructive in the common case. Both IE and Firefox run on Apple OS X, but because of browser-neutrality, we can have more confidence that using Macs will not be problematic. The office can purchase inexpensive, stylish Mac Mini computers that take up far less space and make less noise.

We migrated a medical office of about 10 staff from Internet Explorer to Firefox 1.0. Our real world experience with Firefox has been extremely positive. Installation was easier due to Firefox's out-of-the-box configuration and streamlined setup mechanisms. Using Firefox lead to improved code quality in the internal web site. Firefox eliminated a bug in Internet Explorer's interaction with Adobe Acrobat Reader. Features in Firefox, such as find, pop-up blocking, and absence of ActiveX, led to improved usability and increased security. The few minor issues were solved by simple user training. In conclusion, Firefox 1.0 can be used with confidence in an office environment whose financial viability depends on a reliable web browser.

As of August 2006, the medical office has been using Firefox successfully for nearly two years. Another medical office with 5-10 staff has also adopted the practice management software, and has also standardized on Firefox. The offices have migrated to Firefox 1.5. The main benefits of 1.5 are the improved speed and security, and the automatic updates. Automatic updates save administrators a lot of time in downloading and installing patches. The offices did not choose Mac Minis, but instead inexpensive HPs from local office supply stores or Dell PCs. Firefox runs perfectly fine on these commodity, low-end PCs running Windows XP Home.

There have not been any Firefox-related issues during this time. Since the office staff use only one application for all their needs, they have not had to switch back to IE for any purposes. In the rare case they are using an external website that does not work well with Firefox, they switch to IE for that website alone. When there is a problem with a website, it is usually a bug in the website that affects any browser rather than an IE-specific design. Only a few staff use these external websites, so this has not been a problem.

We have found additional benefits to using Firefox through some of its extensions. For the developers, the Web Developer Extension allowed for quick analysis of forms, frames, and HTML and CSS validation. For the users, we found a drag-n-drop file upload extension. Sometimes, staff need to scan and upload a file into their software, such as an insurance card or patient photo. This allows them to drag-n-drop the file onto the upload form, rather than going through the Windows explorer file browser. Although this has not been deployed yet, it hints at the possibilities for further automation of office workflow.

When demonstrating the practice management system to other doctors, the fact that it runs best with Firefox is proudly stated. Firefox supports some CSS effects, like rounded borders that make the software look much better graphically. Besides the speed and security improvements, this makes a good first impression to potential customers. 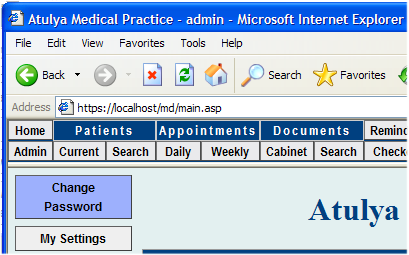 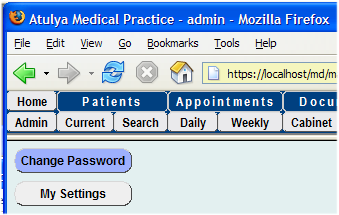 Rounded and outset/inset borders in Firefox 1.5.

P.S. The author of this article is an independent computer consultant with no affiliation to any of the companies mentioned in this article.