Below is an aerial photo of Detroit, Michigan, USA and Windsor, Ontario, Canada. It was taken by my friend Massimo from an airplane on his way back from Venezuela on January 10, 2005.

You should notice a few things in this photo. January is the depth of winter in Michigan, and so the ground is covered by snow and the trees have no foliage. The blurry section to the bottom right is caused by the exhaust trail of the jet engine. The tallest building is the Renaissance center, currently occuped by General Motors and a bevy of smaller companies.

The Detroit metropolitan region is about five million people, whereas the city of Windsor, right across the river, is only about 200,000 people. Beyond Windsor, you can see large areas of white, undeveloped land that is almost exclusively farmland. Detroit is named after the word ťtroit in French, which means narrow. You can see why when you observe that the city is constructed on the narrow part of the river that connects Lake St. Clair to Lake Erie. 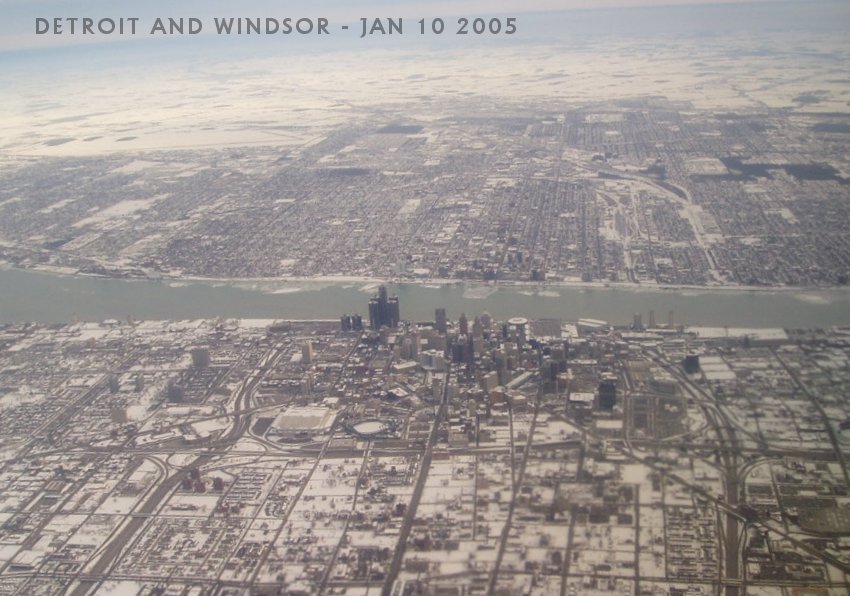 You can see a huge difference in roadway systems. Detroit has highways that encircle and go directly into the city. Windsor has some major roads, but nothing on the scale of those in Detroit. A highway is like a river in its power to separate neighborhoods. It is far worse due to the air and noise pollution that extends for hundreds of feet beyond its extents. This is why Windsor is a coherent, bustling city, whereas Detroit is practically lifeless.

Detroit is an empty shell of a city. As you can see from the photo, large areas around the downtown are empty! Even where there are buildings, a large fraction of them are abandoned, even in the downtown. The highways empty out to large parking structures that are built downtown. Parking structures are a nuisance in a downtown area, due to the noise (car alarms), pollution, and traffic they bring.

Detroit is a perfect example of a city without a strong, grass-roots city plan. The forces at work you see are individual political ambitions, wrong-headed federal policies, and the whims of corporate interests, much of it spurred by racism. Highways, built in the 50s and 60s, separated the neighborhoods and destroyed their interconnection with other neighborhoods. It is simply not possible to form neighborhoods in four block segments separated by Interstate highways. Highways, in many cases, were the agents of racism, and they continue to blight the city today.

Currently, funding for transportation is allocated by a formula which allocates 10-15% to transit systems and 85-90% to roadways. This formula perpetuates the blight of highways in downtown, because they keep getting rebuilt and expanded instead of torn down. Forumulaic spending of tax dollars not only breaks historical precendent, but it represents ineptitude in government.

The first step towards a rebirth in downtown is not enterprise zones, stadiums, cultural events, or welfare. The first step is to eliminate the transportation funding formulas. Tax dollars from gas taxes and vehicle registrations should go to the state general fund, and from there they should be spent according to a coherent plan to which our politicians can be held accountable.

Once that is done, it will be clear that expanding or rebuilding the downtown highways is an exercise in foolishness. Not only because they blight the city today, but because the cost of maintaining them will be a burden on future generations. Instead, they should be torn out completely and replaced by narrow surface streets with dedicated mass transit lanes. The highways should instead extend towards the city only up to Detroit's second ring. This is the area bounded by I94 to the North-West and I75 to the South-West.

At the termini of the Lodge, I75 from the North, Michigan Ave, and I75 to the South, there should be built large commuter parking lots. From these lots, the travelers would travel by free mass transit throughout the city and to downtown. By eliminating the highways, the entire section of downtown Detroit would become habitable again. Once the funding formulas are eliminated, it is likely that the total cost will be cheaper than expanding and rebuilding the existing highways that are only used a few hours a day.