Consolidating student loans when interest rates are rising can make a lot of sense. Student loan interest rates are determined by a statutory formula set by the US government. The actual laws are defined in Title 20 - Education, Chapter 28 - Higher Education Resources and Student Assistance of the United States Code. As you develop your financial plan, you will want to refer to those laws for answers to your specific questions. It is a lot of reading, but well worth the effort.

The 91-day Treasury bill (or T-Bill) is a U.S. government security that is sold weekly via auction by the U.S. Dept. of Treasury's Bureau of the Public Debt. Treasury bills are sold by the government to raise money for the short-term, namely four, thirteen, or twenty-six weeks. Treasury bills are sold at a discount, and redeemed for their full value when they mature. For example, if a T-bill is purchased for $950 and redeemed for its full value of $1000 after 26 weeks, then the buyer earned an income of $50. This means the buyer earned approximately 2.5% on his investment. The interest rate earned is called the bond equivalent rate.

Because T-Bills are sold in such high volume, they are a good way to determine a benchmark interest rate for short-term debt. Student loan interest rates are adjusted annually to "the bond equivalent rate of 91-day Treasury bills auctioned at the final auction held prior to such June 1." (20 USC Sec. 1077a) You can find out the historical T-Bill rates by visiting the http://www.treasurydirect.gov/RI/OFAuctions - Historical Treasury Bill Auction Download at the TreasuryDirect website. Search for Treasury Bills, 13-Week. Below is a graph of the T-Bill bond equivalent rate between 1980 and 2005. 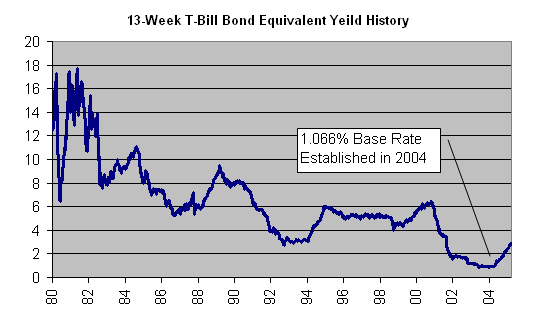 As you can clearly see in the graph, the T-Bill interest rate hit a low in 2004, and since then has spiked up back over 2.5%. Left unconsolidated, student loan variable rates will be readjusted on July 1, 2005 to the higher rate. This is the main reason why consolidating prior to June 30, 2005 might make sense for you. Obviously, the lower the interest rate, the less you will pay in interest over the course of the loan.

Loan consolidation is the process of taking multiple loans from different lenders or sources, and combining them into a single loan. Consolidation does not raise or lower the amount of the debt owed. However, it does make other changes. If one currently make multiple payments, then that will be reduced to one. If the current loans are at a variable interest rate, the consolidated loan will be at a fixed interest rate for the life of the loan. With student loans, you can only consolidate once unless you take on additional student loans.

Congress recognized the need for loan consolidation and regulated the whole process. (20 USC Sec. 1078-3) The regulations prevent lenders from taking advantage of borrowers. Basically, there are no fees for loan consolidation and the consolidated interest rate is determined by a formula. The formula simply takes the weighted average of the interest rates on the loans consolidated, rounded to the nearest higher one-eighth of 1 percent, with a maximum of 8.25 percent. (20 USC Sec. 1077a)

Lenders make profit on consolidation loans whenever they can borrow money at rate lower than the loan they must give you upon consolidation. If interest rates rise to the point where the borrowed costs them a higher interest rate than what they are earning on the loan, the Department of Education makes a special payment to reimburse the lender. On the other hand, when interest rates are declining, their spread widens beyond the reimbursment point, and they keep the extra profit, which is known as Floor Income. It is a great business, because the lender is guaranteed a certain level of income regardless of the direction of interest rates. For more excellent information on how this works, read the definitions section of a Sallie Mae Annual 10K. Sallie Mae is the nation's largest private student loan originator.

In summary, if you have variable-rate Federal student loans, you can consolidate them now to take advantage of the lowest interest rates in the history of the program. The main advantage of consolidating now is that you lock in today's low interest rates for the remainder of your loan term. The caveat is that you can not reconsolidate again in the future if interest rates decline again. Rates are so low right now, that in some cases, you can make money off your student loans. For example, if you consolidate your loans to a rate of 2.5%, and you deposit funds you would have used to pay off those loans instead in a savings account that pays 3.25%, you will be making a profit. Student loan interest is generally tax-deductible, so you'll be making an after-tax profit.

Lenders can not change the terms of loan consolidation, but they still must differentiate their product in order to attract borrowers. To do this, lenders can offer special discounts and services, usually involving interest rate reductions and online access. You can also consolidate your loans directly through the government, but then you do not get any special discounts. By knowing where to find the best discounts, you can get the advantages of a well-known and regulated product (the student consolidation loan) at the most favorable terms.

Below is a survey of discounts offered by some student loan companies as of April 11, 2005. AD Percent is the reduction in interest rate if you choose to pay via auto-debit. GP Discount is the reduction in interest if you are a good payer and make a minimum number of consecutive, timely payments. GP Months is the minimum number of months you must consecutively make timely payments before the GP Discount takes effect. Some lenders offer a discount if you consolidate in your grace period, and some discounts require a minimum amount of indebtedness to qualify. Now that interest rates are rising and lenders floor income decreasing, the days of loan balance reductions seem to be over.

An organization to definitely check out is http://www.graduateleverage.com - Graduate Leverage. This is the nation's only student led debt consolidation & management service, run by a group of Harvard Business school alumni. Their benefits include loan assessment, collective bargaining to get the best interest rate incentives, and additional advocacy services.