A suitability study is performed into the use of distributed mobile wireless networking for the purposes of urban traffic congestion mitigation. The technologies of global positioning system (GPS), wireless networking, and mobile ad-hoc networking (MANET) protocols are surveyed for potential usability and applicability in a peer-to-peer highway vehicle network. Analysis of traffic statistics for the Boston, MA metropolitan area reveal the parameters required to build an initial network. The estimated parameters are a two percent level of penetration (50,000 vehicles), two Megabit per second usable data bandwidth, one half mile average transmission range, two hundred dollars cost per device, and fifteen million dollar total system cost for five years of operation. Using a hop-count routing algorithm, the network would support collection of area-wide vehicle positions for automated highway traffic sampling and fleet tracking on congested roadways.

Following this first stage system are presented two more application scenarios according to increasing levels of penetration and increased reliability of the network. The medium-term application is the provision of mobile Internet access to allow consumer and business services. The long-term application is the ability to perform automated transactions. Envisioned in this long-term scenario is the ability to do area-wide road pricing to reduce congestion levels and influence land-use decisions.

Technology options and design choices for privacy protection are discussed including voluntary participation, incentivized participation, blackout zones, aggregation of data, non-identifiable data, and anonymous routing protocols. Centralized toll tables and transactions are shown to reduce privacy but increase convenience as opposed to distributed toll tables and in-vehicle transactions. Insitutional implemention through Federal ITS funding of a State-run public-private partnership is suggested to maximize mutual benefit. Given these options for handling the issues, the staging presented, and the flexibility, coverage, and application benefits of the system, the conclusion is that such a network would be suitable for mitigation of urban traffic congestion. 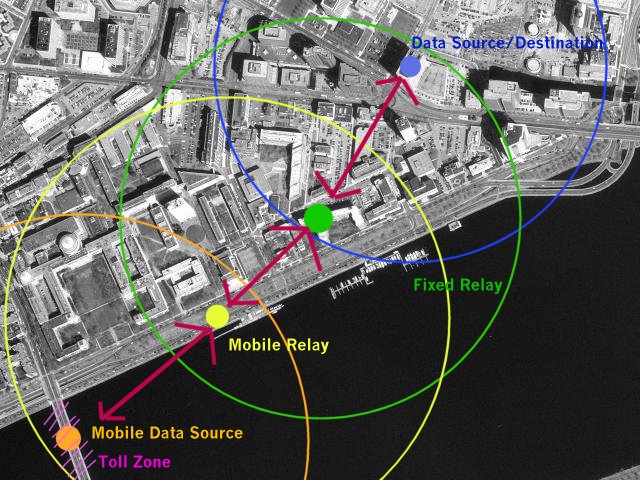 The figure above shows how data would hop between different nodes (mobile and stationary) via theshort-range, wireless, ad-hoc network. The devices would use a standardized, GPS-based protocol to route the data to the destination address.

The figure above shows the range and bandwidth of various wireless spectrum technologies from 2001. 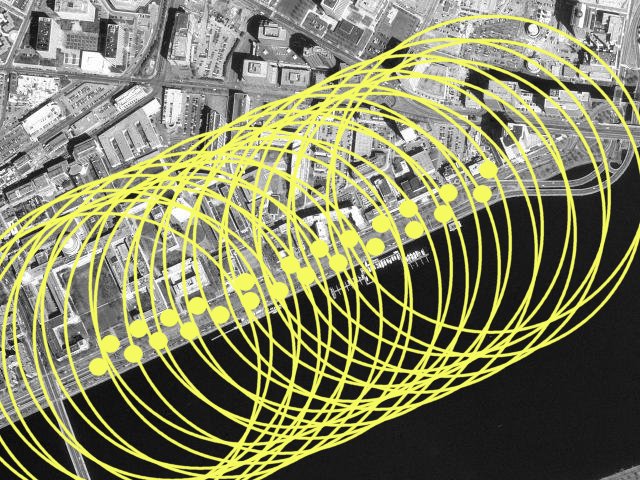 This figure shows how range overlap of the wireless devices would occur in a congested situation. With congestion pricing, however, congestion would be far less likely to occur.